Getting behind the wheel to drive funds and awareness for polio eradication, District 9510 will launch its Polio Ute Relay on World Polio Day.
Please donate now:  https://www.endpolio.org/donate

Starting on Friday 23 October, World Polio Day in Adelaide. The Polio ute will become the metaphoric relay baton as it passes from Club to Club/Area to Area finishing in Alice Springs at the end of April, World Vaccination week.

The BT-50 MAZDA ute will become a gleaming baton for the End Polio Now campaign as it is passed from area to area, where promotional events will be staged to capture media and public attention.

District 9510 will provide the ute and coordinate the concept, with individual areas to arrange their individual events and promotion of the relay within the area. “These events are entirely at the discretion of each staging post, but will aim for maximum club participation, public involvement and media coverage to publicise Rotary’s involvement in eradicating polio worldwide”. While area events may include fundraising, the main fundraiser will be in the form of a raffle, which will run throughout the relay and be drawn at the final stop in Adelaide.

“This is a tremendous opportunity to unite our 85 clubs in District 9510, increase public awareness across three states and the Northern Territory about Rotary and its connection to polio, and raise significant funds for the End Polio Now campaign”. 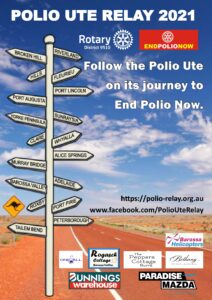